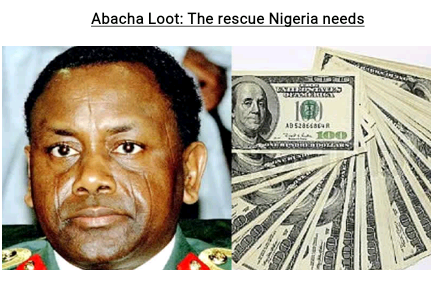 Once again, the Nigerian state is grappling with another shocking revelation of the seizure of £211m loot in Jersey Island, United Kingdom by the late military dictator, Gen Sani Abacha. The exposure cuts deep into the chequered history of the primitive looting of Africa’s biggest economy beyond comprehension.
For those who care to know, Nigeria was not established to survive. Ab initio, it was the product of a struggle for resources and commodities that started even before the amalgamation of the northern and southern protectorates by the British colonial administration.
Even Nigeria’s founding fathers had described her as a ‘mere geographical expression.’ From the Royal Niger Company, to its sale to the British Empire at the sum of £835, to the feudal take-over, military usurpation and the feeding bottle democracy, she was bestowed with in 1999, the country was meant to bleed profusely for a few oligarchs and their cronies, even those in far away climes. Amid the surplus, the teeming population is left to suffer in extreme penury and lack. The sum total of this precarious situation of the Nigerian nation-state is that the country has been perpetually reduced to a sharing of the till, neck-deep in a distributional conflict unmatched in human history.
At the last count, it is believed that the Abacha junta carted away between $5bn and $10bn. The consequences of this inglorious and infectious thievery are legion: from the social, economical, developmental, political and even psychological. The gall part of it all is the dislocation of Nigeria’s common heritage and the resulting poverty and deprivation, which the ordinary Nigerian has been left to wallow in.
About $2bn is believed to have been recovered by the Nigerian Government since the country’s return to democracy in 1999. Yet, lack of accountability and transparency has become the bane of the fund. It is this pervasive mismanagement of the recovered funds that the west and the rest of the world should be concerned about.
Since the recovery of Nigeria’s stolen wealth started, there have been frantic efforts, shrouded in secrecy by state officials and by way of litigation and negotiation charges, to short-change the country. There has never been any altruistic pathway to the recovery of the looted money, including the zeal to be transparent with it. Necessary safeguards required to ensure accountability with the funds have all been shoved aside. The Federal Government has blatantly refused to render accurate account, with regard to the recovered loot. Legislative efforts to hold the government accountable have ended in a stalemate. This is followed with a dummy that is often sold to the gullible citizenry about ploughing the funds to infrastructural development, even without any traceable indicator.
It is this quagmire and crass corruption that have characterised the recovery of the stolen funds that the United States, the United Kingdom, European Union and the rest of the world should rather focus on. As it stands, Nigeria edges towards the precipice. It is one of a dysfunctional states that the west should expedite action by helping this country out of the woods. It is estimated that Nigeria’s stolen wealth stashed away in foreign countries is capable of pulling her from the brink of economic collapse. It is therefore incumbent on the US, UK and the EU to show that commitment — starting with the Abacha loot.