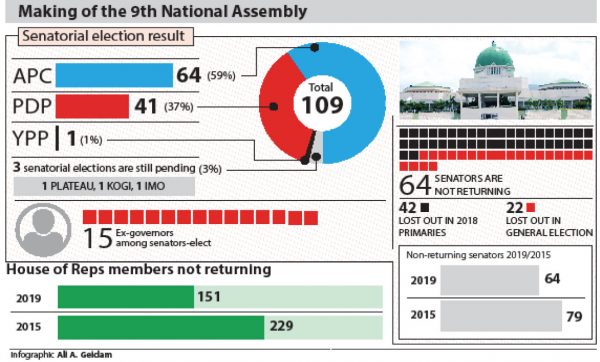 No fewer than 64 serving senators and 151 members of the House of Representatives will not be in the 9th National Assembly in June when it will be inaugurated. Only 45 senators and about 209 members are returning to the federal legislature, according to the results of the elections released so far by the Independent National Electoral Commission (INEC).

Fifteen of the newly elected senators are former state governors. Forty-two of the 64 non-returning senators lost out in October last year at their parties’ primaries. The remaining 22 were defeated at the Saturday’s National Assembly elections. The ruling All Progressives Congress (APC) has 64 senators-elect so far, while the main opposition Peoples Democratic Party (PDP) has only 41. Another political party, the Young Progressives Party (YPP) has one senator-elect.

INEC has declared 106 senators-elect so far. Three senate seats are yet to be concluded from Plateau, Kogi and Imo states. The number of non-returning senators is an improvement over 2015 when 79 senators did not return to the Red Chamber. Out of the 42 senators that lost out during the primaries, few of them did not contest for reelection, while many of them went into the contest but lost. For the House of Reps, the number of non-returning lawmakers represents 41.9 percent of the 360-member chamber. The number is expected to rise as election results from some constituencies are yet to be declared. However, the results released so far showed that the APC got over 200 members so far in the House, while the PDP has a little over 100.

The big losers:
Among the big losers is Senate President Bukola Saraki who has been in the Senate since 2011. He was defeated by Ibrahim Yahaya Oloriegbe of the APC. Saraki was Kwara state governor between 2003 and 2011.

Also, a former governor of Akwa Ibom State, Godswill Akpabio, who had served as Minority Leader before his defection to the APC last August, lost his return bid. He was defeated by Christopher Ekpenyong of PDP. Akpabio was Akwa Ibom governor between 2007 and 2015.

Another former governor, George Akume, who has been at the Senate since 2007, lost to a serving member of the House of Reps, Emmanuel Yisa Orker-Jev. Current Minority Leader Biodun Olujimi from Ekiti State lost to Dayo Adeyeye of the APC.

The 9th Senate:
Daily Trust reports that from the results released so far, APC has a simple majority of 64 senators, higher than the 61 overall senators the party got in 2015. Though APC has a comfortable majority, it still lacks the two-thirds majority, which is 73 senators to pass major legislation.

On its part, PDP got 39 senators so far against the 48 overall it got in 2015. The YPP has one. There are chances that both APC and PDP may get additional seats from the three undeclared Senate seats. Whereas 46 senators won their reelection bid this time, only 30 senators won in 2015, while 79 senators lost their return bid in 2015.

Six of the governors are currently serving their second terms, which will end on May 29. They are Geidam, Okorocha, Almakura, Shettima, Yari, and Amosun.