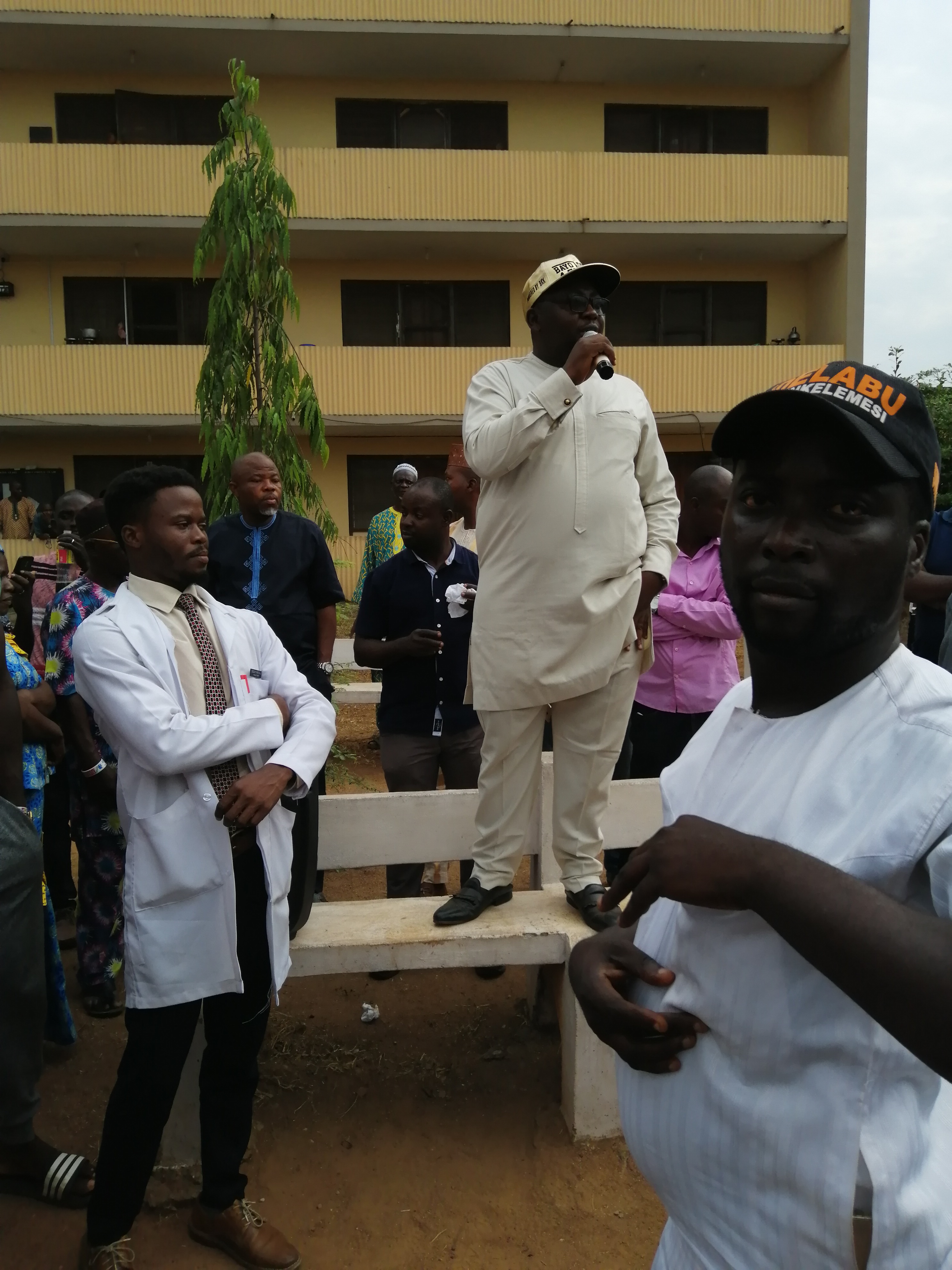 The Oyo State Governorship candidate under the aegis of the All Progressives Congress (APC), Mr Adebayo Adelabu “Penkelemesi” visited Alexander Brown Hall at around 5:00pm on Friday, 1st March, 2019. His visit came shortly after the Hall ‘Town Crier” had repeatedly informed residents of the hall about the governorship aspirant’s visit. He arrived with an entourage which included popular Yoruba movie star, Saheed Balogun, security officers and members of his campaign team. He was flanked by the Hall Chairman of the Alexander Brown Hall, Mr. Ogeleyinbo Bodurin James (popularly known as OBJ), and he used a ceramic bench as a pedestal for easy view. A good number of Brownites (hall residents) came out to listen to him.

In the comprehensive speech which he delivered in front of the volleyball court, he urged Brownites to be actively involved in politics. He also recounted how he was a product of the public school system. He doled out his academic achievements which included graduating with a First Class degree in accounting from the prestigious Obafemi Awolowo University, at the age of 20, and other achievements, of which one of them was serving as the Deputy Governor of the Central Bank of Nigeria. He also tried to stir up the belief of everyone present that Ibadan could be the Dubai of tomorrow. He urged his audience to stoke their fire of patriotism in spite of the government’s shortcomings.

He listed 7 CARDINAL POINTS, which he said would be the focus of his government when elected. They include;
-Adequate security
-Mechanized agriculture
-Decent and affordable housing
-Affordable education at all tiers
-Healthcare delivery system
-Good environment
-Transportation and transport management system

He named 3 of these 7 as priority sectors, and they were agriculture, healthcare delivery system and education.

He explained that mechanized agriculture was key to mitigating shortage of food in an area like Ibadan with a large land mass and dense population.

As for education, he explained that it’s practice at the primary level should be free, while that at the tertiary level should be supported and well funded. He expressed his displeasure at the unpaid salaries of lecturers and strike actions.

For the healthcare sector, he highlighted the use of sanitary inspectors, the school feeding program, establishment of primary healthcare centres in every ward across the state, rebuilding of infrastructure in state hospitals, and employment of more medical personnel in state hospitals; as methods which would be used to revamp the sector.

He went on to urge Brownites not to sell their votes and their futures for inconsequential sums of money. He also promised to upgrade the security in the hall, tar the roads in UCH and bring Independent Power Plants (IPP) to UCH.

After the conclusion of Penkelemesi’s speech, the hall chairman assured the governorship aspirant of at least 700 votes for the APC during the governorship elections. He thereafter brought forward the issue of poor ventilation and a non-functioning television set in the TV room, alongside the need for funds for the forthcoming health week. Penkelemesi responded by agreeing to donate a 100 inch curve TV to the hall. He also agreed to help with financing of the health week by assigning the cost of food and drinks during the health week to a member of his campaign team. He then gave #250,000 for the Hall Chairman to buy food and drinks for hall residents that came out to attend. This was followed by loud rounds of applause from the hall residents.

Afterwards, he answered a question from a member of the audience regarding health insurance. He consequently listed his social media handles for those needing answers to other questions.

Whilst Penkelemesi delivered his speech, a group of women identified to be workers in one of the cafeterias in ABH, looked in bewilderment in the direction of Saheed Balogun, as they could not believe their eyes had come in contact with a personality confined to their TV screens. A group of female students were also seen posing with Saheed Balogun for pictures. A lot of people who were not hall residents were also spotted.

After Penkelemesi left the Hall amidst a lot of fanfare, the characteristic tussle for small sums of cash seen in political campaigns across the country ensued amongst workers based in ABH, and non-brownites who had got wind of his visit to the hall premises. A woman was seen smiling as she triumphantly walked away with her mint 500 naira note like she had just won a trophy. An elderly woman was also seen kissing the dust after she had lost the battle of the survival of the fittest with some bigots who wanted to curry favor from Penkelemesi. None but one human decided to help her up to her feet, as everyone else was busy trying to touch the helm of Penkelemesi’s pocket or lick his boot.

I wish Mr. Adebayo Adelabu good luck in his bid to become the next governor of Oyo State. I sincerely hope his lofty promises will not be as empty as most rooms were during his visit.