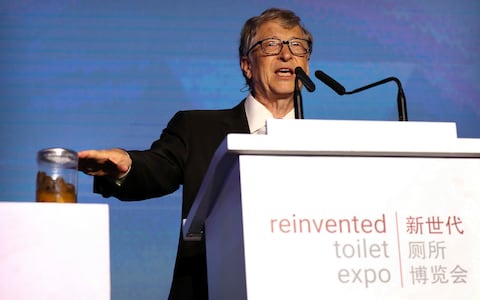 One of the world’s richest men, Bill Gates, says toilet is a serious business as he unveiled a futuristic toilet (Reinvented Toilet) that uses chemicals to turn human waste into fertiliser. The Reinvented Toilet is a collection of innovative technologies that use different approaches to break down human waste and destroy germs – leaving behind clean water and solids that can be used as fertilizer, or that can be disposed of safely outdoors without further treatment.

The mega-rich philanthropist said he has bet about $200 million to the project and he’s expecting to spend the same amount before the toilet will be available for wide-scale distribution.
Gates said the reinvented toilet market could generate $6 billion a year worldwide by 2030 and save $233 billion annually in costs linked to diarrhoea, cholera and other diseases caused by poor water, sanitation and hygiene. The 63-year-old billionaire unveiled the toilet at a trade event in Shanghai, China.

At the event, Gates caused some giggles in the crowd when he used a beaker of poop as a prop during his speech. The co-founder of Microsoft said poor sanitation is a serious issue that kills more than 500,0000 people every year.
“To help address this problem, we worked with partners to develop a small-scale treatment plant to process fecal sludge and biosolids from pit latrines, septic tanks, and sewers. The self-powered technology—which can be located almost anywhere—is called the Omni-Processor. It takes in human waste, kills dangerous pathogens, and converts the resulting materials into products with potential commercial value—like clean water, electricity, and fertilizer .”

According to him, the initial demand for the Reinvented Toilet will be in places like schools, apartment buildings, and community toilet facilities.

An end of open defecation in Nigeria?

The toilet of the future will help some African countries like Nigeria to address the lack of proper toilet facilities. According to the United Nations, an estimated 108 million Nigerians still lack access to toilets as many still practice an age-old culture of open defecation.
It will also help the country to save cost on diarrhoea, cholera and other diseases caused by poor water, sanitation and hygiene.