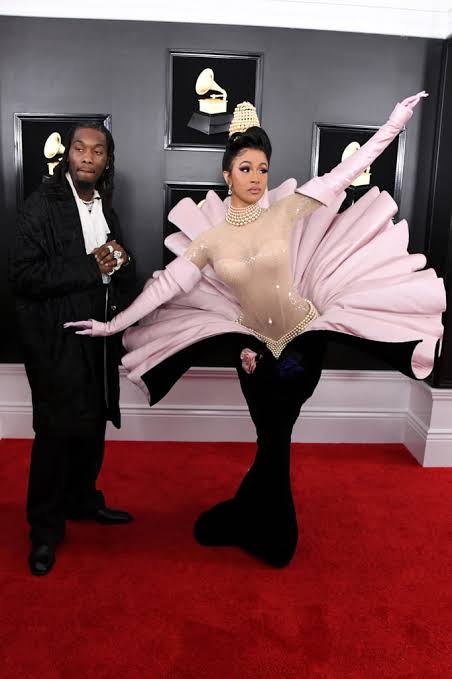 Cardi B just won best rap album for “Invasion of Privacy,” becoming the first solo woman artist to win the Grammy in that category beating all the Queens such as Lil Kim, Nicki Minaj, to that coverted title.

She was without doubt emotional and appeared to be shaking even clinging tightly to husband rapper Offset’s hand, telling him at one point, “I can’t breathe, babe.”

Cardi then joked, “Maybe I need to start smoking weed.”

She thanked her daughter, Kulture, explaining that her pregnancy forced her to get her album and videos done before her stomach started showing.

“I want to thank all the artists that took their time and did verses for my album,” Cardi B said before turning to Offset. “You, husband, thank you.”

Although this revelation has stirred up strong negative reactions from the social media community and even other artists., the 26 year old Grammy Award winner has come forward to defend herself in an expletives filled video posted on Monday ( which was taken down afterwards), in delicate terms, she snapped.

“You know what, it’s not my style for people to put other people down to uplift somebody else. That’s not my style and that’s not what I’m with and I don’t support that, however I’ve been taking a lot of s–t today,” she began. “I’m seeing a lot of bulls–t today and I saw a lot of s–t last night and I’m sick of this s–t. I work hard for my mother f–king album.”

She went on to talk about being nominated last year for “Bodak Yellow,” but she didn’t win any awards for the song, how everyone was saying she got snubbed.

‘Now it’s a motherf**kin problem?!,” Cardi continued. “I locked myself in the studio for 3 months, my n***a. Didn’t go to sleep in my bed sometimes for four days, pregnant… while everybody was harassing me like ‘You can’t do it…”