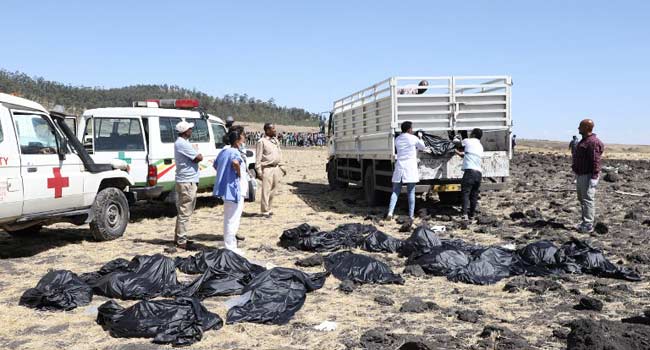 An investigation has begun in Paris into the cause of last week’s crash of a Nairobi-bound Boeing jet that killed all 157 passengers and crew, Ethiopian Airlines said.

“An Ethiopian delegation led by the chief investigator of [the] Accident Investigation Bureau has arrived in the French Safety Investigation (BEA) facilities and the investigation process has started in Paris,” the airline wrote on Twitter.

The two black boxes from the plane that came down just six minutes after take-off from Addis Ababa on Sunday were taken to Paris on Thursday.

BEA investigators will try to retrieve information from the cockpit voice and flight data recorders, which were damaged in the crash. Similarities between Sunday’s disaster and that of a Lion Air flight in Indonesia in October that killed 189 people have raised fears about the safety of the Boeing 737 MAX 8 model.

US was the latest country to suspend the Boeing 737 Max from flying after nations after the President announced a plan to ground all Boeing 737 MAX aircraft amid intense international and political pressure following the second deadly crash in less than five months. Other countries include the UK, the European Union, China, India and Australia all grounded the aircraft.