FACT-CHECK ON THE VICE PRESIDENTIAL DEBATE

HomeFACT-CHECK ON THE VICE PRESIDENTIAL DEBATE 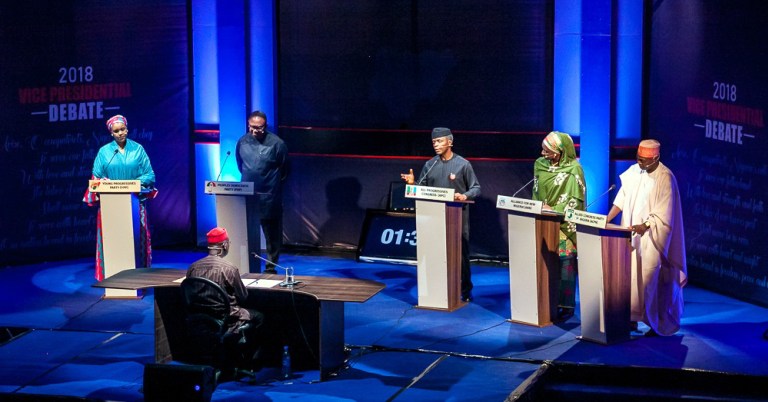 Although all five candidates marshalled their points during the debate, candidates of the two major parties – APC and PDP – attracted the most attention Friday night. Some of the candidates also posted their claims on their verified twitter handles after the debate.

Mr Osinbajo of the APC participated in the debate as the running mate to President Muhammadu Buhari, while Mr Obi, a former governor of Anambra State and vice presidential candidate of Atiku Abubakar, stood in for the PDP. 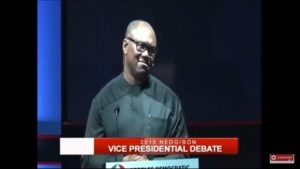 Claim 1: The federal government spends only N5 on the health of each Nigerian citizen per day.

Verdict: True. Analysis of the budgetary allocation to the health sector shows that in the 2018 appropriation bill presented by President Buhari last year November, N340 billion was allocated to the sector

It meant that the government’s plan was to spend N1,888 on each citizen for the whole year, translating to approximately N5.20k per day.

Claim 2: Nigeria has the highest number of out-of-school children in the world.

Verdict: True. A Demographic Health Survey (DHS) said to have been conducted in 2015 by the United Nations Children Fund (UNICEF) and the Nigerian government claimed Nigeria’s population of out of school children has risen from 10.5 million to 13.2 million. Although some have questioned the authenticity of the survey, Nigeria is largely ranked as having the highest number of out of school children in the world

Claim 3: In arguing that petrol subsidy was a waste of resources, Mr Obi said there are only two million vehicles in Nigeria

Verdict: Largely true. Although the NBS has not published unemployment report in the last few quarters, the bureau reported in 2017 that no fewer than 4.4 million Nigerians joined the unemployed in the country. The NBS said the percentage of unemployed Nigerians increased from 16.2 per cent in the second quarter of 2017 to 18.8 per cent in the third quarter

of the same year.

Verdict: False. The National Bureau of Statistics (NBS) data showed that the total value of capital importation into Nigeria stood at $9.6 billion in 2015 and $12.3 billion in 2017. In the second quarter (Q2) of 2018, it fell to $5.51 billion. FDI inflows to Africa in 2015 was an estimated $38 billion, down 31 per cent from $54 billion recorded in 2014. Nigeria’s total capital imported stood at $20.7 billion only in 2014 and even that fits not into Mr Obi’s narrative because FDI is just a part of capital importation, often divided into three main investment types: Foreign Direct Investment (FDI), Portfolio Investment and Other Investments, each comprising various sub-categories.

Verdict: Subjective. Although many analysts including Amina Mohammed, UN Deputy Secretary-General have expressed worriesover the nation’s debt profile, the government has consistently said all was well with the nation’s debt to GDP ratio. In May, the immediate past finance minister Kemi Adeosun said Nigeria’s debt to GDP ratio was far lower than many other countries of the world.

Claim 7: Mr Obi also claimed that Nigeria has fallen on the global competitive index to 127 from 124 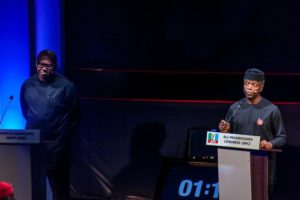 Verdict: Not proven. A PREMIUM TIMES’ fact-check showed in June that although the government has recorded improvements in the local production of rice, its flagship programme is still dogged by a number of setbacks.

Claim 2: Government has made efforts to develop Small and Medium Scale Businesses

Verdict: Largely true. The government, for instance, has designed a lower tax rate of 20 per cent applicable to small companies in manufacturing, agriculture and mining within their first five years of business. In April, the federal government also initiated a Start-up programme designed to build entrepreneurial spirit in youths and prepare them toward self-sustaining. The Bank of Industry and Bank of Agriculture also have different programmes lined up for enterprising youth who wish to create jobs and need capital. Many Nigerian youth have however complained of how difficult it is to access many of these initiatives.

In 2013, the Jonathan government flagged up the reconstruction of the highway. The N167 billion project was contracted to Julius Berger Nigeria Plc and Reynolds Construction Company Limited for repairs on Section 1 (Lagos-Sagamu Interchange) and section II (Sagamu Interchange-Ibadan) respectively. Although it was expected to be completed within 48 months, more than 5 years after, (and three years since this government came into power) the road has not been completed.

Verdict: True. Aside a telephone interview conducted with a farmer Saturday night, PREMIUM TIMES’ checks on Agro Market, an online market for agricultural products, showed that the average price of fertilizer ranged between N6,000 and N7,000.

This was against the higher price of about N10,000 it was sold in the past. The government has deliberately made efforts to reduce market prices.

While Mr Obi undoubtedly led in the deployment of figures and statistics to back up his claims, Mr Osinbajo too pushed forward a number of claims using statistics. The other candidates, however, dwelled largely on generalities, many of which may not be subjected to verification. It is, however, important to state that they also made one or two statements backed up with statistics.

In case you missed the Vice-Presidential debate, watch the video via the link:

The presidential debate is set to hold on January 19, 2019 at Transcorp Hilton Hotel, Abuja.