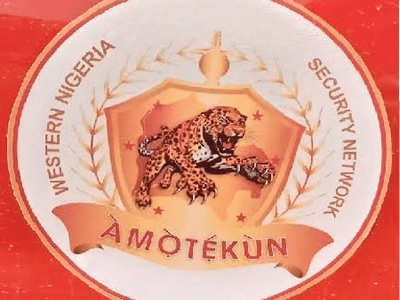 Some traditional doctors in Ijebu land have expressed their readiness to lend a full backing to operation Amotekun been the community police to curtail all sort of criminalities in Yoruba land.

When contacted, some of the herbalists said the local police group orchestrated by Southwest governors should not worry if the Federal Government bar them from using the modern arms.

They said local charms would be improvised for the team free of charge to accomplish their assignment.

Chief Aremu Agbomola, in his contribution, said “ the Amotekun police officers should approach us for charms free of charge. We have enough traditional powers to give them. It is all in the interest of Yoruba nation security. We believe that Amotekun will be our traditional police, so, we must lend them good support to fight criminals in our land. There are traditional powers in Yoruba land which surpass the modern arms, and we are ready to release them to Amotekun to make then formidable to the criminals like kidnappers, Yahoo boys, armed robbers and other. “

Also, one of the leaders of the Ifa priests in Ijebu land, High Chief Ifaneye Odusanwo when contacted said, Amotekun would be fully backed by deities in Yoruba land through the herbalists. He said Ijebu land been known for true traditional powers would ensure total support for the outfit to defeat enemies.

He also advised that the officers of the team should be sworn-in at the shrine of various deities in Yoruba land so that they don’t misbehave.

“The initiative is welcome, provided it is for total security of the land. Our deities will back them through we the herbalists. We will give them the necessary supports that will help to combat various crimes. But the officer must be sworn in at various shrine in Yoruba land like Ogun, Ifa, etc so that they don’t misbehave. The herbalists in total Ijebu land will support them with our powers so that Yoruba land can be secured.

The traditionalist also implored the Federal government to overlook the negative impression created by some people about Amotekun. He said it is a community policing to strengthen the Federal police efforts.