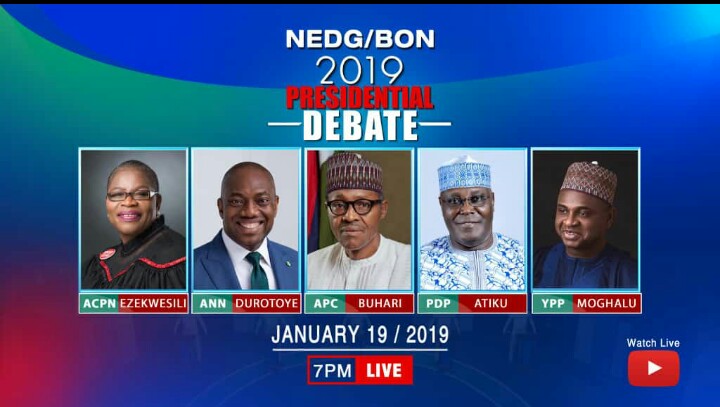 The presidential debate organised by the Nigeria Elections Debate Group (NEDG) and the Broadcasting Organisations of Nigeria (BON), held on Saturday January 19, at the Transcorp Hilton Hotel, in Abuja.The debate which started at around 7pm was the same venue where the vice-presidential debate held on Friday, December 14, 2018. The debate offered the platform for the presidential candidates to reveal to Nigerians their plans for the country as the nation prepares for the general elections this year.

Five political parties were selected to participate. They include: the Allied Congress Party Of Nigeria (ACPN), the Alliance For New Nigeria (ANN), All Progressives Congress (APC), the Peoples Democratic Party (PDP) and The Young Progressive Party (YPP). As such, the candidates that were expected at the debate were President Muhammadu Buhari, Atiku Abubakar, Oby Ezekwesili, Fela Durotoye and Kingsley Moghalu.

Atiku, who flew in from the United States, appeared for the debate but stepped aside from the stage on the grounds that Buhari was absent. The drama that led to his pulling out of the event started as he was being fitted with microphone preparatory to the debate. He explained that he could not debate issues arising from Buhari’s policies in his (Buhari) absence. Speaking as he walked out, Atiku said: “I am walking out because I expected to come and debate with Mr. President. The President has been in office for the past three and a half years. He is not here to defend that record. So who am I going to debate with? If he is on his way, when he comes, I will come back. “I came back from the US to participate in this debate but the President is not here.” In a statement he released after he walked out, the PDP presidential candidate said:

He added, “I, however, challenge President Buhari to choose a date and time for a debate where he will be present and I will be there, hopefully with the other candidates as well.”

A statement by Buhari’s Campaign spokesman, Festus Keyamo, explaining the absence of the President, said he had taken up other formats to market himself. He also noted that Buhari’s time was overstretched by the activities of yesterday that saw him commission projects during a campaign visit to Niger State. “In addition, the busy and hectic official and campaign schedules of Mr. President clashed with this programme. On Saturday, Mr. President commissioned the Baro Inland Water Port in Niger State and campaigned in Niger and Plateau States where his time was over-stretched by the tumultuous and mammoth crowds in both states (as seen by Nigerians on live television) and only returned to Abuja late this evening”, the statement said. Buhari and his Vice-President, Yemi Osinbajo, had on January 16, 2019, attended an event tagged ‘The Candidates”, a presidential town hall co-production between Daria Media and the Nigerian Television Authority (NTA), supported by the MacArthur Foundation.

In the absence of the duo, the trio took the centre stage at the debate. The debate, moderated by Mark Eddo, was staged at the Congress Hall of the Transcorp Hotel. Despite the claims of the two men, nonetheless, the three candidates present at the debate took turns to lampoon Buhari and Atiku over their absence.

Meanwhile, the following are the nuggets served by the candidates of the Allied Congress Party of Nigeria, Oby Ezekwesili; Alliance for New Nigeria, Fela Durotoye; and Young Progressives Party, Kingsley Moghalu:

Besides questions posed by the moderator, the candidates present at the debate responded to online questions asked by comedienne, Emmanuela, a former Big Brother Nigeria housemate, Bisola Aiyeole, among others.