Cristiano Ronaldo has become the first man to 100 Champions League wins, with the Juventus superstar reaching that mark against Valencia.

Records continue to tumble around the Portuguese as the bar of individual excellence is raised in each passing campaign.

Ronaldo was not among the goals in his most recent outing, but he still made a telling contribution in a 1-0 victory for the Serie A champions.

It was his cross that allowed Mario Mandzukic to record the only effort of the game, with a narrow success enough to carry Juventus into the last 16.

Their talismanic No. 7 is now one step closer to capturing the sixth continental crown of his remarkable career. 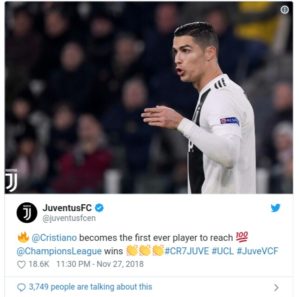 He has previously lifted the trophy with Manchester United and on four occasions with Real Madrid.

When taking that haul into account, it should come as no surprise to find that he has become the first player to hit a century of wins in the competition.

Ronaldo actually suffered defeat in his first Champions League appearance, against Stuttgart back in October 2003.

A first victory was secured against Rangers in his second outing, and he has not looked back from that point. He is already the all-time leading scorer in Europe’s elite club event, with 121 efforts to his name.

Only Iker Casillas has made more appearances than his tally of 157, while he has topped the goal charts in six successive seasons.

He boasts the record for most goals recorded in a single European season (17), and also sits second and third on that list.

There are various other marks that he has passed down the years, with his haul of victories the latest entry on a stunning CV. Tuesday’s win also hit a new mark for Juventus. 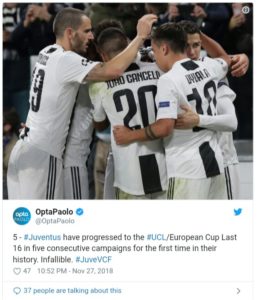 The Italian side have now made the last 16 of the Champions League five straight years for the first time in their illustrious history.