THE BIG TALK SERIES (Episode 3): AN ELECTIVE POSTING TO REMEMBER 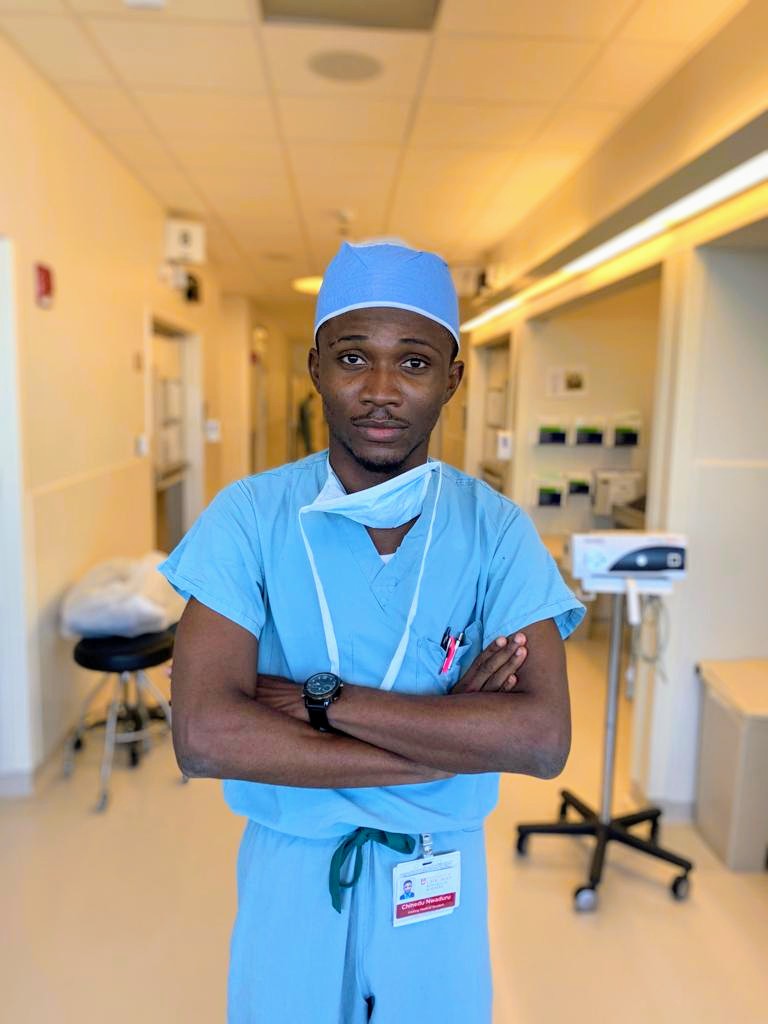 On the 3rd episode of the Big Talk series, we have the pleasure of having one of UIMSA’s most diversified and interesting personalities, a jack of all trades of some sort; and the list goes on and on. I have here with me Nwaduru Chinedu.

Thank you for joining us.

Chinedu: Thank you for having me here

Interviewer: We got to here of your adventure of having your elective posting in the University of Chicago pritzker Medical School along with some of your colleagues So first of all, where did the idea of having an elective abroad come from?

Chinedu: It was as far back as late 2016, it seemed that a lot of people in the 2k14 class were going abroad for their electives. So me and some friends got together and decided that it will be a good idea for us to see for ourselves the positive reviews of the healthcare system over there. So we got to create a group chat and included members who also shared the same ambition. Chicago wasn’t initially my first choice but in the end everything went well and I have no regrets.

Interviewer: Besides seeing your senior colleagues go abroad, were there any other personal motivating factors behind your decision? Because a lot of junior colleagues who have seen you guys go abroad now have an awakened desire to do so too and a lot of what you said seems to be playing out in the 2k16 class presently

Chinedu: Well, of course. I had always wanted to see what my Western counterparts in the medical school were doing and to see how advanced technology improved healthcare, so seeing the 2k14 guys go, was just an added motivation

Interviewer: Thank God it did work out but what if going abroad didn’t go as planned? What were the alternatives here in Nigeria, was Ibadan ever an option?

Chinedu: To be honest, Ibadan was never really in the picture. It would have probably been St Nicholas hospital in Lagos or lagoon hospital but certainly somewhere outside Ibadan

Interviewer: You must have encountered a myriad of challenges, so how were you able to overcome them and tell yourself to keep on trying?

Chinedu: I’m going to be honest and open for the sake of those who also want to go. The challenges were quite individualized but one of the most worrying was the academic calendar here in Ibadan. It was difficult to get a school that was admitting students at the same time that you were doing your medical elective and then hoping that a strike wouldn’t put all your plans to shambles. Choosing a school was also a problem as Midway through your research you find out that there are certain requirements or fees that put you off and then choosing a department to do your elective can be quite tricky especially if you haven’t yet figured out what you want to do in the medical field and you want your posting to be relevant to your field of specialization.
Then the biggest one was funds. You really cannot escape it except your parents are really boxed up. It depends on how much you really want it. When my family members saw how determined I was , they were willing to give their support.

Interviewer: Were you afraid at any point that it might not work out and all your efforts might come to nothing? We’ve heard about people being denied after the Visa interview and all that…

Chinedu: Believe me, I was at every point. My biggest fear was not being able to go after all the efforts especially because of funds. And then there was the fear of meeting deadlines. These guys are very organized so there’s no begging for failing to meet their deadlines. There was a time we had incomplete documents or we got the wrong vaccination but thankfully it all worked out.

Interviewer: So how much should one be prepared to set aside for an elective abroad?

Chinedu:I will say have between. 1- 1.4 milllion naira. The bulk of the money goes to your flight tickets. The cheapest flight you could get going to the U.S is around the range of #400,000 and above.

Interviewer: How long does it take between starting your application and getting it approved?

Chinedu: I will say roughly 6 months and that is mainly due to the immunization which has to be taken in doses. The paperwork shouldn’t take more than 3 months to finish but I will always advise that you start early.

Chinedu: Of course. I also think that’s every parent’s fear. They want to know who you’re going with and it keeps them at ease to know you’re going with friends. It made it a lot better, I will always say, the more the merrier. We got yo share many beautiful moments together. It also made the process less stressful as my friends helped me out with the application process.

Interviewer: How would you describe your experience over there, does it qualify as a life changing experience?

Chinedu: Certainly… In a nut shell I would advise anyone that has the chance to go abroad to do so as it would do you still world of good. Medicial field over there goes beyond the scope of what you ever thought. I took so many pictures but Even that doesn’t sufficiently describe my experience over there.. I did my posting in the Department of Transplant Surgery and it was amazing.

Interviewer: Why did you choose transplant surgery?

Chinedu:I had two choices, the first being the department of cardio thoracic surgery and the second being transplant. I initially preferred the former but the latter turned out to be. A fantastic choice in the end even though it began not as the most preferred choice

Interviewer: What makes the Pritzker Medical School so special and how was it like relating to the Consultants there?

Chinedu: I will say the environment, They’re are big on medical education and hungry for excellence. It was very engaging and this is one of the leading medical schools in the states that is intent on making breakthrough discoveries through research. It’s obviously many imes better than Ibadan as they’re not on the same level but like Ibadan they want to be the leading medical school in the U.S. My interaction with the senior colleagues was awesome. Even before I arrived I already started interacting with them online. They were welcoming and friendly and made you nteract with them on a first name basis. The relationship was great, more like that of friendship but there was still that respect and it only increased my zeal to learn.

Interviewer: Your advise to those who want to do electives? The Doses and Don’ts those who consider it as a form of holiday and others who want to go abroad but are discouraged?

Chinedu: I really don’t know if the first group intend to practice medicine but if they want to , then it is not a chilling posting. You need to prioritize and give a good impression about yourself. They will only write a recommendation based on what vthey perceive of you so you have to up your game. You must be proactive and ready to learn and be seen to have the patients best at hand. There will be time to enjoy and have breaks. They will always encourage you to explore the city since you’re a foreigner. For the second group I don’t know what they’re going through but I will say , let your passion infect others. Let it not be that you didn’t try enough. If I didn’t go I would have been disappointed but I would have been satisfied that I gave it my all. It would be less painful knowing that you gave it your best

Interviewer: This might be a tough one, but what were your best moments at Chicago?

Chinedu: There were so many. One of them was cooking in the house where we stayed, then there was the food, I considered it a Palatine adventure because there were so many great dishes to try. Then we went to the Zoo and Millinieum park which was fun. There were some really great Museums. Then wegot invited to some really fun dinner parties, one of which was proof olopade which was an honor because we were the only elective students there. My blueberry muffins , Netflix and the awesome Library.

Interviewer: Comparing UCH and there , did you find it hard to adjust coming back?

Chinedu: They’re basically incomparable as there is no basis for comparison. It was sad coming back but I was comforted with fact that I would be leaving soon. The doctor patient relationship there is great; here the doctor is a god but over there the patient is at the centre of everything.The technology is advanced even their clinical skills and acumen is fantastic.. I think I have to change the way I interact with patients

My guys and close friends Segun, Tofunmi, Mayowa, Fawaz, Kemi, Bolanle, Edwin, my Pritzker group, my attendees, everyone that checked up on me , my friends that were very supportive of me. The list is just too long and most importantly my class 2k15 , which is the best set and a very close knit class, we may not be the loudest class but everyone is supportive of each other when someone is doing something everyone shows support.