THE UCH SINFONIA AT 20 CONCERT: A NIGHT TO REMEMBER

HomeTHE UCH SINFONIA AT 20 CONCERT: A NIGHT TO REMEMBER 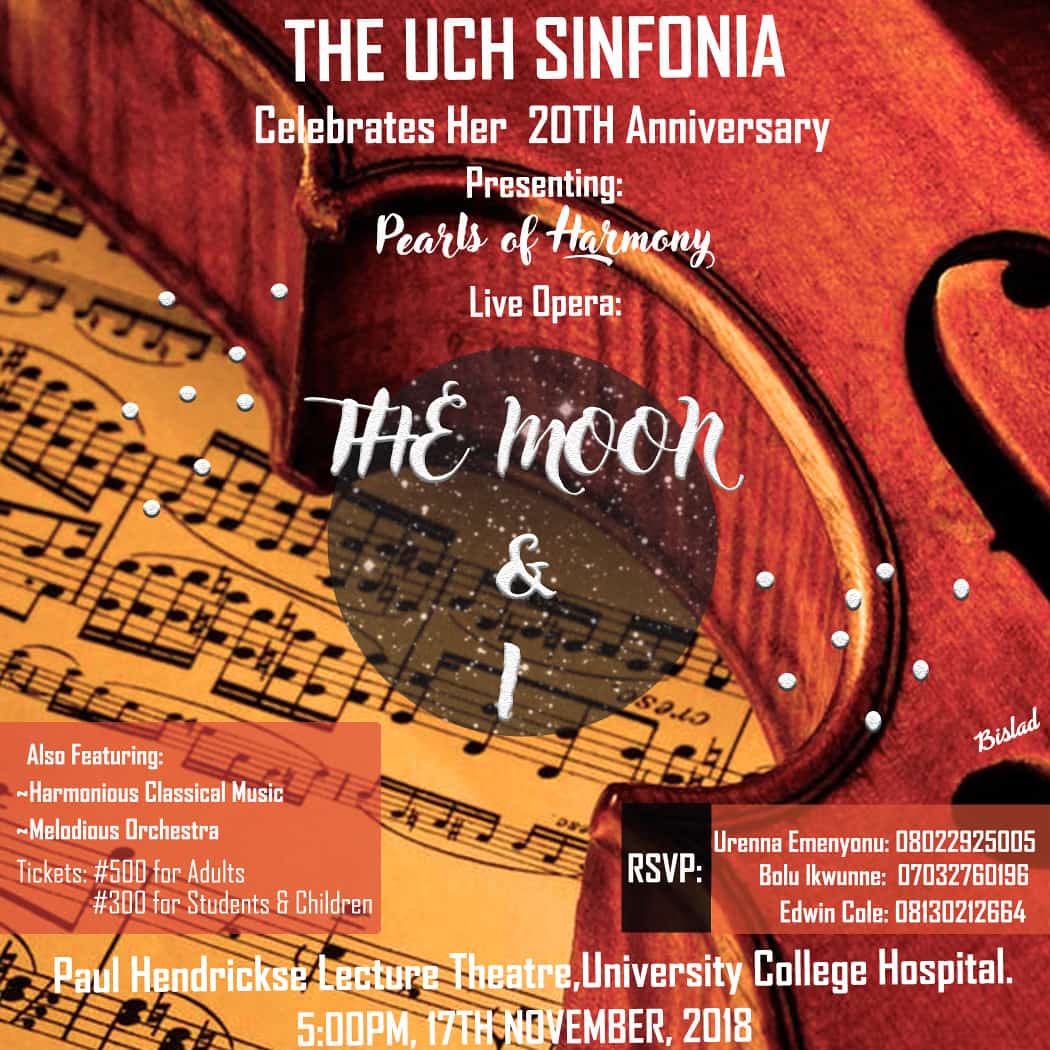 The University College Hospital (UCH) Sinfonia recently celebrated her 20th Anniversary concert titled “The Moon and I” at the Paul Hendrickse Lecture Theater on Saturday, November 17th, 2018. Like every great day and events, this one too has come and gone, but it has surely left its imprint on our minds. The focus was kept on the performances, with everything else kept thankfully brief.

The concert was opened with prayers, anthem and introductions. Then, it was straight to the Choir’s rendition of “Come Let’s Be Merry”, “Great Is Thy Faithfulness” and Patewo (Composed by Dr Oyedun). These, especially the last one, we’re marked with a synchronous harmony that got the audience attentive and waiting for more.

The entertainer (Scott Joplin), presented by Mr Tunde Akinyele with the trombone was crisp and quick . Followed by the delectable Miss Doris Osuagwu, who with her rich, beautiful, playful voice lay the melody of “La Pastorella Dell Alpi” and “Art is calling for me” on us lightly and sweetly like a butterfly. She elicited more than a few chuckles and laughter with her voice giving life to the comedic lyrics.

However, the highlight of the evening was the opera “The Moon and I” which was brilliant in its waxing and waning with sharp peaks of humor as well as tragedy. Babajide Oyekunle (Claudio) deserves some real accolades for his beautiful acting and bass-baritone voice that carried us through the story. I commend Edwin Cole (Glen) and Chibuike Nwachukwu (Pedro) for their acting and their very well rendered dismay at Claudio’s utterly “loveless” life. However, their mics were nothing to write home about. Eghonghon Okojie (Linda in the pink dress) really killed it with her body language, especially the eyes. 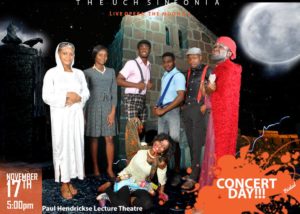 Irene Opara made a fast mad woman. The speed! Micheal Akande’s (the magician) act did not have enough expression in his voice but showed us all we needed to know by his flawless body movements. Frances Chukwu (tall Beatrice) should have used her arms less and the rest of her body more. However her sweet, beautiful voice put the heroine at the center of our attention. The whole body thing got better after she got blind, I guess that really does sharpen the senses. Oh wait, it’s another actress (Miracle Ayeni). Act 1 Scene 9 was brilliant, and even though I did not get the couple’s dance I was expecting (salsa), I’m still okay (not). I concluded that it was a funny, fast paced brilliant rendition. But then it went on.

Things got real, African Magic style, when the mad woman was poisoned. We also took a trip to epic Igbo ville when Claudio went to the land of monsters and got saved by the moon (Bolu Ikwunne) who not only lit up the stage but also my mood at that point. Nice sideways exit, singing tree (Adeyinka Tosin). The female monster was really impressive. Good stuff! In the end the opera was a hit. Would have been better if it was shorter and if I hadn’t gone completely red in the face, head and neck (during the jazzpowder usage) but it’s still pretty good.

I appreciate the magician apprentice’s knees (Pelumi)  and the lawyer’s voice. Kudos to the stage setters (Onyedika Chukwuelobe, James Eyitayo, Daniel Animashaun, Marvellous) who did a good and speedy job considering the amount of improvising they had to do.

The cutting of the anniversary cake and awards ceremony were done immediately after the opera. This involved the Patrons, Music Directors and Assistant Music Directors both past and present. The tribute to the Late Miss Jessam Iwara and Dr Mrs bukola Osinusi Fagbamiye, was heart rending, Miss Joy Akang held the room in a melodious melancholy with her lead of the Modimo rendition.

The Sinfonia Orchestra performed The wedding Song by Fela Sowande and did beautifully despite the rocky start. Expecting things to take a snoozy turn, we were pleasantly surprised by the rendition of the hilarious NEPA (composed by Dr Oyedun) by the Sinfonia Choir.

Item 7 was Seap bottled water and doughnut. The vote of thanks was given by Bolu Ikwunne and closing prayer by Longinus Ozota.

Sold out with people standing at the back, the hall was humid and hot for those not near the windows. However, one thing most of us agree on is that we will be there for the next concert, soon and at the right time.

*Thanks to Miss Oyinkan Bakare who gave me a place to sit and watch.