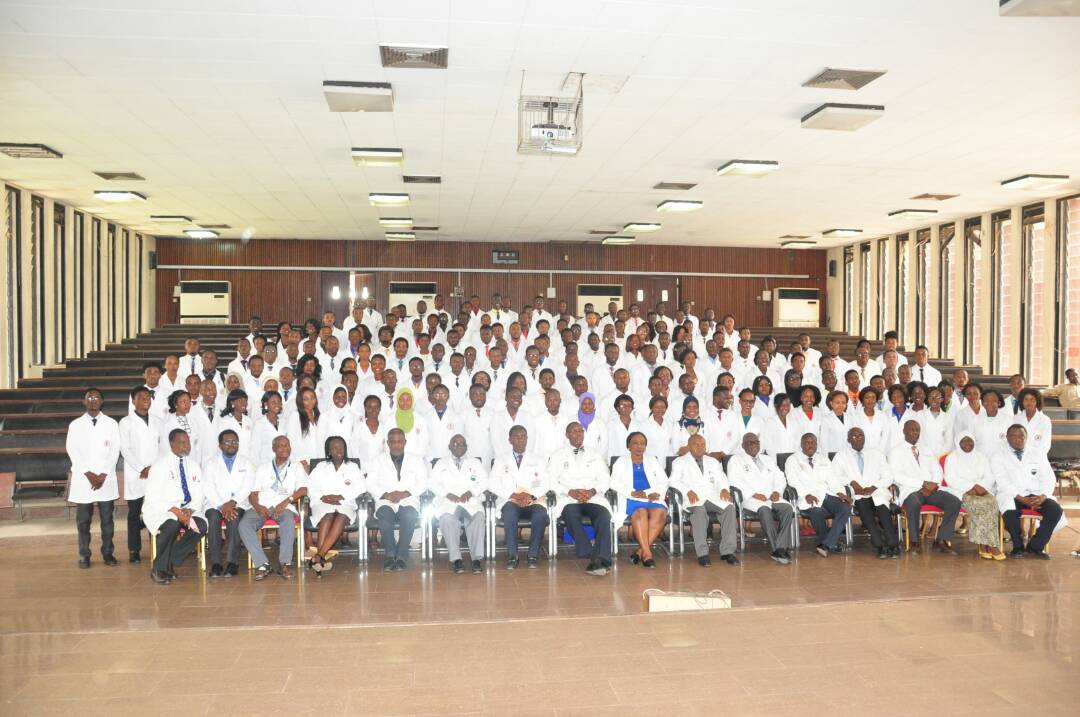 The College of Medicine Educational Unit Director, Prof. Adebola Ogunbiyi and other members of her team planned a successful White coat ceremony for the latest clinical students of the College of Medicine, the 2k17 set of MBBS and BDS students on the 30th October, 2017. This would be the first of its kind in the history of the college, what a lucky set.

The ceremony had present  Prof. Olubunmi Olapade-Olaopa who is the Provost of the college of Medicine, Dean of the faculty of clinical sciences, Prof Malomo, Dean of the faculty of Basic Medical sciences, Prof Ademowo the director CMEU, the  sub deans of the MBBS and BDS programmes who doubled as the masters of ceremony for the event, Dr Lawal of Paediatric Surgery, Dr Adeoye of Pathology and the sub dean undergraduates Dentistry. Also present were the CMAC UCH, the deputy CMAC in charge of clinical duties, Prof. Okeke the HOD surgery, the HOD Paediatrics, Dr. J. K. Ladipo of surgery department and other high value clinicians.

Prof Ogunbiyi while addressing the students spoke on the importance of the white coat ceremony saying it is not just a practice but has been found to be of other numerous benefits. It originated in the university of Chicago but the first full-fledged event was at the Columbia university of physicians and surgeons in 1993. One of the benefits as she mentioned includes giving the students a professional mentality which guides them as they carry out their day to day activities. “This is the first of its kind in the College and subsequently would be extended to other programmes in the college” she said.  Later on, Professor Malomo reminded the students that it is a privilege for them to be taught and called the service of patient care and never mistake that privilege for power. “Patient is first” he implied. He reminded the students that medicine requires more than their brain at this level but requires their ability to subject themselves to proper mentoring. 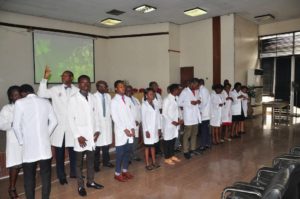 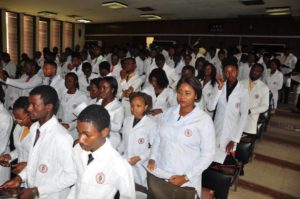 The provost  who was the guest speaker at the event talked extensively on the Hippocratic oath and how it guides good medical practice. He assured the students that the teachers available are in ‘locus parentis’ to them and are ready to train them to be good doctors as it would be committing something  more than suicide for any doctor who trains his students to be poor doctors. He made the students understand that the “white coat ceremony” is a realization of self-dedication to the service of humanity and also signifies the confidence of their teachers in them to learn the art of medicine. According to the provost humility, hard work, sacrifice, integrity and diligence would be required of the students henceforth. He urged the students to keep their white coat truly white as it signifies purity as not all doctors are truly white coat doctors.

After the talks, the major event of the day took place which was the donning of the students with the white coat by the clinicians present at the event, Professor Okeke, the HOD surgery donning his son with the white coat was a beautiful scene to see. After which, the students took the Geneva’s Mordern Day Physician’s oath, a revised version of the Hippocratic oath and at the end was a series of photo shoot and selfies with the provost and his team members. 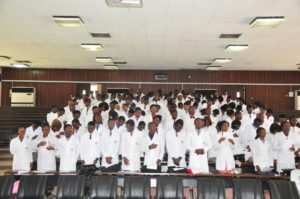 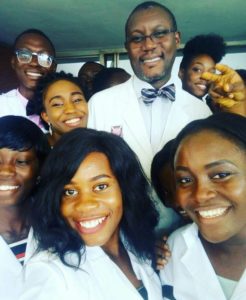 Thanks to the CMEU and the College of Medicine as a whole, the students left with words written on their heart enough to guide them through their career as medical doctors.