ATIKU CAN GET NIGERIA WORKING AGAIN

HomeATIKU CAN GET NIGERIA WORKING AGAIN 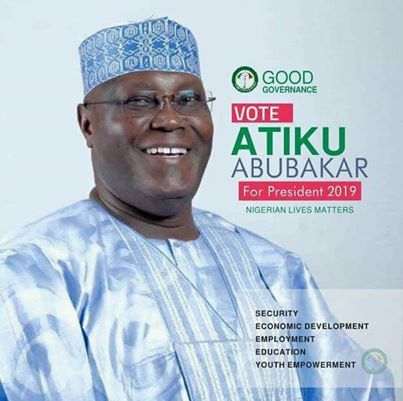 Some weeks ago, I came across a photo captioned “A lost nation is one that its people celebrate the leaders who put them in their misery”.

These words came off as a harsh reality. It was as though I was hit by a ton of bricks. As a result, I lost hope in my country. I felt my beloved country had entered the fourth stage of its malignant existence.

No sermon about a bright Nigeria would make sense to me. Thoughts like, the buying of Ekiti people in the last guber election, the Northern feudalistic style of ruling, sycophancy as commonplace in our society, among others flooded my mind.

While in this pensive mood, I pondered on what makes the difference between Nigeria and countries that work; I wanted to know what Rwanda is doing that makes them one of the best countries in Africa.

Rwandans experienced one of the bloodiest genocides in history. They were broken and ruined. They became an object of international derision.

But they reconciled. They worked hard. Today, Rwanda shines as a beacon of liberty and progress to all of Africa. This couldn’t have been possible, without one man- Paul Kagame.

In a time as volatile as this, Nigeria needs a Kagame, The people’s hearts yearn for a leader who will provide jobs and put food on their tables, Nigerians want a leader who will repair our fractured relationships and make peace reign again. That leader is Abubakar Atiku.

Having recovered from the pathetic lies APC fed me with in 2015, I was wary about supporting any candidates. However, ever since I read atiku’s political policy, I had to atikulate. Because unlike Buhari, Atiku’s promises are simple and realistic.

Atiku’s understanding of economics and Nigerian economy knows no bound. He knows our economy is uncompetitive, uninspring, undivesified. He is aware that Foreign investments have declined.

He knows it is long past time to fix our economy, which is why, promoting the Agricultural, manufacturing, oil and gas sectors; expansion of our export base and increasing flow of FDI into non-oil sector are prioritised in his policy documents .

Atiku’s vision and mission are clear- “Our vision is to transform Nigeria into a modern economy that works for its people and capable of taking its rightful place among the top 20 economies of the world. My economic policy will be jobcentred especially for our teeming youth population ”

“My mission is to ensure that Nigeria’s economy is responsive to the challenges of the 21st century knowledge economy by keeping with the amazingly dynamic technological pace”.

Our unity as a nation is under treat. From Buhari’s ministerial list to his biased judgement on national issues, it is obvious nepotism has eaten up every fiber of this administration. You cannot have Buratai, Dambazu, Idris all Fulanis as your security chiefs and not expect other tribes to feel threatened. 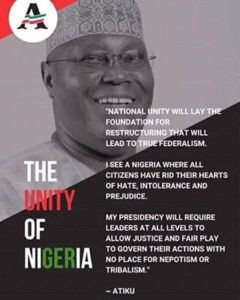 Atiku is a nationalist. He understands unity in diversity as he never stops chorusing the songs of restructuring. Our current system of government has failed us. With restructuring, no group would feel alienated and cheated, Nigeria would compete with top countries, and Nigeria will work again.