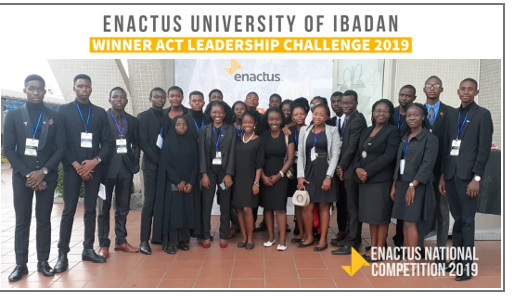 This interview was on the 22nd of July, 2019 with Ernesto Dibia (Enactus PRO) and Ugochukwu Okeke (Enactus Team Leader)

Ernesto: Enactus UI is a student organisation where a group of students (University of Ibadan) use entrepreneurial actions to better the society, better the lives of people and create sustainable solutions to problems we face individually and collectively as a society.
UGO: It was founded in 1975, first as SIFE before the name was changed to Enactus. The word, Enactus originates from this sentence, “ENtrepreneural ACTion by US”. We believe investing in students who take entrepreneurial action for others create a better world for us all. We see possibilities, action and enable progress (our slogan).

All right… so when did you join Enactus

Ernesto: I joined Enactus in 2018, yea, in 2018. Why did I join? Well, I made use of my skill for Enactus and I was more or less “inducted” into the organisation.
UGO: It termed head-hunting, it’s a thing we do in Enactus. There are two ways to get into Enactus. Every year, there is a recruitment period where we bring in new members through the process. We identify people who through the course of the year have specific skills, talents, opportunities, abilities that may help the team and we go after these guys for their immense potential. People like Ernesto. That’s how he came into the team. He is an avid public speaker who’s great at what he does. We identified that and reached out to him because of his skill basically.

Why?
UGO: Why? because Enactus is amazing. That’s the only way to put it. There are thousands of Enactus teams over the world
Ernesto: (buts in) In Nigeria, I think we have over 30 institutions in Nigeria?

UGO: over 3,600 universities are involved in Enactus with over 76,000 students in total and every year, the amount of impact these individuals make is immense(repeats self for emphasis). I found out about this through my classmate, Segunblack and when you go on the internet, searching for what Enactus is doing, you’d see people of our age, or younger making such an impact on a scale that may seem impossible to you otherwise. This inspired me to join Enactus so I could join the network of people who do these kind of things and to become someone who actually achieves something for society instead of someone who complains about it.

You just participated in a competition. Comparing both outcomes from last year’s and this year’s, would you say that it’s been a big step forward or backward? If there were things you could have changed or done better, what would it have been?

Ernesto: this year our target was, “one small step for man, one giant leap for mankind”
UGO: (laughs)

Ernesto: it was a beautiful experience. I went to the competition with 35-38 people to Lagos. It was great; pitching and winning the Act Leadership Challenge this year. Last year, we expected to win it because we really put up a good project and an amazing pitch as well. We didn’t. So this year, we knew we had to win that competition and yes, we WON it.
There’s a major Enactus competition where the winner gets to go to pitch at the World Cup later in September and the other, the leadership challenge. This year we went as far as the semi-finals. Although, we lost to Covenant, who eventually emerged winner, it was still a good outing. We put up a good fight, it felt…it felt great. We expected going to the finals but…

UGO: this year was very strategic, yes. Unfortunately, last year, we went for the same competition alongside 30 other schools that submitted projects for the competition. Through rigorous screening exercises, we eventually made it to the top 3. We thought we’d win…we had such a great project. When we lost, it was a heartbreaker because honestly, we could not tell why but we came back and tried to rebuild our morale, rebuild everything. The reason why I’m spending some time on last year was because it was supposed to be strategic as well. It’s unfortunate that in the history of Enactus UI, there have been so many high times and lows. As far back as 2012, we would have qualified to go to the World Cup; the closest we’d come to winning the Nationals. After a couple of years, the team died down. There were some succession lapses and the team did not function for a while. It was in 2014 the team picked up. In 2016, only 7 people went for the National competition. Between then and 2017, a lot of work has been put into trying to get the team back together; putting structures in place to ensure things work well and we could bring competitive projects to the competition that would have an impact.
The team membership has tripled to about 70 members.

We went for the Act Leadership Challenge this year; the National competition was not really the focus because to win that competition, you need to have amassed so much impact that the whole country would be able to say that you’re doing well. And we had only worked on the projects for a few months. This happened because of a lot of turbulence in the school calendar.
After rebuilding the team, we faced a lot of issues including trying to get everyone on board because of everything that happened- the strikes, protests. After we lost last year, we tried to re-strategize and take this project we had just presented-scaling it up to be used to win the National competition and the Act Leadership challenge the next year (this year). What happens next? Another strike and all the momentum gathered, fizzled out. It wasn’t until a few months ago, we decided that after the strike was called off, we’d come onboard to do something amazing again.
We built a beautiful, beautiful project to take children off the streets and brought people in the community, people from school to scale up this project and it was what we eventually won with. It was amazing. We went this time feeling confident that we’d win this and once we started presenting, there was no doubt anymore. This was to show everyone, to show the school that there was potential to do a lot more-to build the team, to compete at the World level. In 2 months, we built a project that won us the Leadership challenge, and made the team that eventually won the competition believe that they had lost to us in the Semi-finals. It was that close. At the very least, we were in the top 3, out of 30 schools that participated in the competition. So with the momentum we have and the team we are trying to build, next year, winning the Nationals should not be our goal. Winning the World Cup should be our goal and the year after,( laughs), we should change Nigeria. We should be winning trophies from the World Bank. That’s the upward trajectory Enactus UI is aiming for.

Ernesto: I quickly want to talk about our past Enactus year. We had 2 projects; Learn again and the Ido project. The Learn Again Project is one in which children out of school are helped to learn again. According to statistics, 20% of children who are out of school in the word are Nigerians. This means that 1 in every 5 out-of-school child is a Nigerian. This year we decided to bring them back to school, help them learn again, smile again.

We went around. We didn’t just send them back to school because we knew that some of the reasons for their not being in school were because their parents could not sustain having them in school. We had to partner with market leaders to help sensitize these parents. We equally empowered these mothers with skills to enable them sustain the kids. It was really huge. We had 5 communities- Sabo, Eleyele, Moniya, Mokola and Yemetu.
The Ido project is a cassava processing cottage at Ido LGA, Ibadan. Farmers have a problem with processing harvested cassavas leading to them incurring post-harvests losses. So have this cottage where cassava is being converted into garri and other cassava products. These were the things we took to the Nationals. We hope to build on it the coming year as well.

So, next year, we should expect the Cup?

Ernesto: Yes, yes. What do you think Ugo?
UGO: Next year, you shouldn’t just expect the Cup. Expect the whole world, mehn! Expect everything. The dream for Enactus UI is not to be an organisation. It’s to be The Organisation. Enactus transcends all. The closest thing I can say Enactus is is the Students’ Union plus extra because it brings everyone, regardless of department or class. It brings everyone together with the opportunity to make impact; within the university and outside. Things the Students’ Union could possibly not achieve, we could achieve those with Enactus. Joining Enactus would simply be investing in yourself and the University. That pretty much sums up Enactus.

You’re going to be recruiting soon? How soon should people get ready for Enactus?
Ernesto: Enactus recruitment commences this week, officially by July 25. This would be on for about 2 weeks for those who wish to change the world with us. We’ve already been receiving a lot of messages from people who want to join. We feel really great and hope that we greater thing this Enactus year.
In addition, this year, Enactus UI would be having a Hackathon. We are trying to encourage student entrepreneurs, seeing how well they can employ their skills in developing the arts, technology and many more. We are encouraging students who have something to prove to the world to participate. We also have our end of the year event coming up-our dinner and it’s going to be massive…

UGO: Just to add. The Hackathon is in partnership with Africa as a platform.