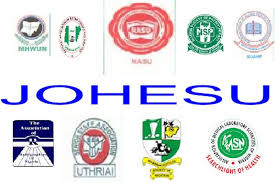 Biobelemoye also said the government had withheld April and May 2018 salaries of some union members that participated in the last strike. Other demands by JOHESU include the age-long struggle for recognition of consultancy cadre for eligible health workers and other outstanding allowances.

The five affiliate unions of JOHESU are the National Association of Nigerian Nurses and Midwives, Nigeria Union of Allied Health Professionals and Medical and Health Workers’ Union. Others include the Senior Staff Association of Universities, Teaching Hospitals, Research Institutes and Associated Institutions and Association of Medical Laboratory Scientists of Nigeria.

Josiah said the unions would be compelled to embark on strike, if the government failed to meet its demands by January 31. “There is a time limit which should have been 21 days, but now, it is over six months because there are still some issues that are unresolved,” JOHESU chairman said.

He said the government breached its agreement with the unions after the last year’s strike, that none of its members should be sanctioned. “Non-payment of salary during strike was not part of the memorandum of understanding we signed with the government.”

“We also have valid order of courts on our outstanding allowances; rather, the Federal Ministry of Health, through various hospital management, illegally paid the arrears to medical doctors. “Medical doctors are not our members, and not entitled to these allowances because they were legitimately appropriated for us; which really need to be addressed,” he said. Josiah said that appointments of leaders in the Ministry of Health were only favourable to the medical doctors. “Meeting health workers’ demands are not essential, but when we plan going on strike, the government would say health is an essential service to get Nigerians’ sympathy,” he said.

Akintayo said that running healthcare services should not be for only one health workforce because the result would be failure in the health system. “What is happening in the health sector is the appointment of doctors, which are far less than five per cent of the workforce in the health sector, to dominate the interest of other health workers, who contribute 95 per cent of workforce. “The world’s number one healthcare care worker is not even a medical doctor; that is why the director-general of the World Health Organisation is a microbiologist,” he said. According to Akintayo, what we have in the health sector in Nigeria is driven exclusively by medical doctors, and that is why we shall continue to contend with negative health issues. “Health issues include infant mortality, maternal mortality, fake drug syndrome, drug abuse and misuse of drugs,” he said.