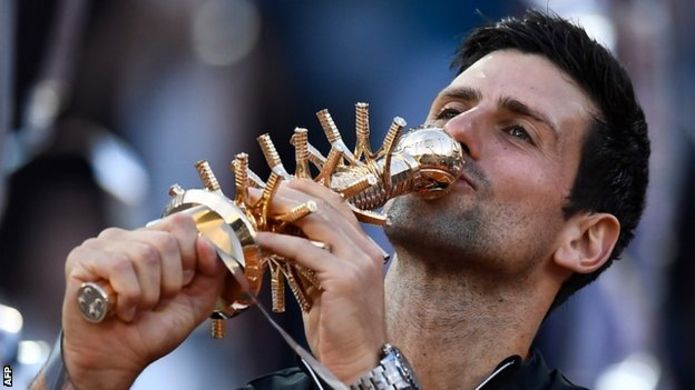 It’s clay court season already, in case you did not know and expectations are already high in anticipation of Roland Garros later this month. Novak Djokovic clinched his 3rd Madrid open title on Sunday, after dispatching 20-year Greek prodigy, Stefanos Tsitsipas in straight sets at the La caja Mágica (the Magic box), in Madrid.

Tsitsipas had booked his final ticket after ousting clay court speciaist Rafael Nadal, in a thrilling 3 set match the day before and was visibly tired as he struggled to compete with the pace set by Djokovic. The Serb took advantage of that, stretching the young Greek; making him chase shadows across the court and eventually won the match 6-3, 6-4.

Djokovic’s road to the final wasn’t exactly easy as he had to confront Dominic Thiem at the semi-finals , but he always showed the kind of composure and control that resulted in him not losing a single set throughout the tournament.

Since his Australian open win earlier this year, Djokovic’s form had dipped evidenced by his early exit at subsequent tournaments, something he had attributed to off-court distractions as president of the ATP player council. However, the resurgent Serb produced an impressive performance, to clinch his 33rd career Masters 1000 title, equalling Nadal’s record in the process. The win also comes with a huge pay check of €1,202,520 and 1,000 ATP Ranking points.

Djokovic will now turn his attention to the Roland Garros tournament, where if victorious, would enable him hold all 4 grand Slam titles simultaneously; a feat he last achieved in 2016 but just before that is the Rome Masters tournament.