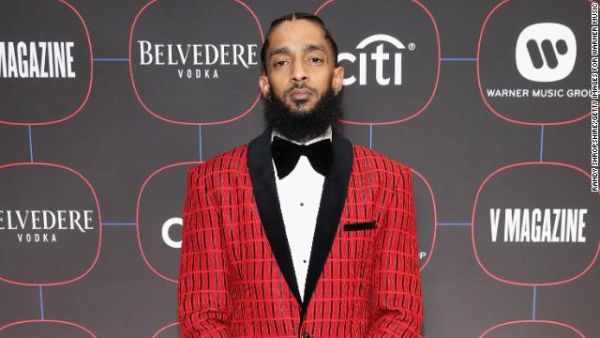 The music world was thrown into confusion and mourning on Sunday, 30th of March, 2019 when news of the death of grammy-nominated rapper, Nipsey Hussle made major headlines. Nipsey, whose real name is Ermias Asghedom, was shot alongside two others in front of his clothing store in Los Angeles.

The Los Angeles police gave now idenified Eric Holder, 29 who is an aspiring rapper himself and an ex-con, as the perpertuator of the crime. LA police who were able to identify Holder based on video surveillance and witness’ accounts have attributed the cause of the shooting to a matter of personal dispute rather than gang related violence. It appears that Holder and Nipsey were well aquainted with each other and police officials declined to comment further on the reason behind the dispute, as it is still an awaiting court case. The two other persons shot are currently receiving treatment in a medical facility for the injuries sustained. A vigil held in honour of the rapper on Monday, escalated to violence resulting in two critically injured and many others suffering multiple injuries.

Nipsey’s partner, Lauren London has taken to social media to express her shock and grief at unfortunate incident while fellow music industry colleagues have send in their condolences and admiration for the now-late rapper. Nipsey and Lauren have a 2 year old son together named Kross Asghedom while Lauren has a son from a previous relationship with Lil Wayne. Nipsey is also survived by a daughter from a previous relationship.