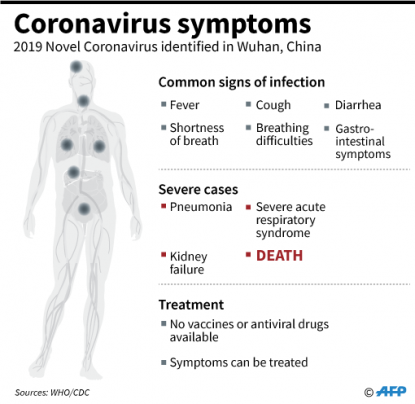 Like the ebolavirus in Nigeria, the coronavirus was discovered in Wuhan, China, sometimes last year. It was discovered in people who visited a seafood and animal market, consequently developing certain unusual symptoms, although it suggests the viral infection is zoonotic. Subsequently, study by researchers who did the genetic analysis of the viral organisms isolated from the body fluids of the individuals who first showed the unusual symptoms not peculiar to any other illness, results revealed a 2019-nCoV virus after comparism with the genetic sequences of more than 200 coronaviruses known. It was also observed that the virus was likely contacted from two kinds of snakes peculiar to that part of China where the disease originated. The snakes are the many-banded krait (Bungarus multicinctus) and the Chinese cobra (Naja atra). But, some other researchers have rejected the claim that the virus was contacted from the snakes.
Coronaviruses are a group of viruses known to be the causative agents of lower respiratory tract illnesses such as pneumonia and bronchitis. Most coronaviruses known are not zoonotic but a few of them have the potential to affect humans. Examples of other coronavirus strains include the Middle East respiratory syndrome coronavirus (MERS-CoV) and the severe acute respiratory syndrome coronavirus (SARS-Cov), which are known to present with more chronic symptoms that even the current 2019-nCoV.

Epidemiology
So far, about 1,975 persons have been reportedly infected with the virus, with a 50% incremeant in the number of people infected within 24hours of first reported case. About 56 persons have lost their lives with increasing spread of the disease to neighboring cities within China. While the death rate can not be ascertained yet, Older people (> 60years) with other preexisting conditions have the highest death rate recorded however.

Clinical presentation
Most people infected with these virus present with symptoms similar to SARS-CoV but with subtle absence of specific signs like pharyngitis, sneezing, rhinorrhea etc.

Treatment
There’s no known medicine or Vaccine for 2019-CoV yet, but adequate measures can be taken to avoid contact either directly with the virus or with people infected with the virus.

Mode of infection
The primary mode of transmission still seems to be from animal to human,usually by way of infected animal products (meat especially) and Sea foods.
Mode of disease spread
Viral droplets(from viral particles from a cough or sneeze);
Direct contact with someone who’s already infected (touching or shaking hands);
An object or surface with viral particles on it (then touching your mouth, nose or eyes before washing your hands);
Feacal contamination (rare)
Safety and precautionary measures
Avoid travelling to China and its environs for a while
Avoid contact with sick people.
Avoid dead or live animals or animal markets or products that come from animals such as uncooked meat

Wash hands with soap and water regularly
If infected by the coronavirus, one should take steps to help avoid transmitting it to others including isolating oneself at home while putting on a face mask, covering one’s mouth properly while coughing and sneezing.
As much as possible, give considerable distance between yourself and someone sneezing or coughing.