World Food Day is celebrated every year around the world on 16 October in honor of the date of the founding of the Food and Agriculture Organization of the United Nations in 1945. The day is celebrated widely by many other organisations concerned with food security, including the World Food Programme and the International Fund for Agricultural Development.

ORIGIN
World Food Day (WFD) was established by FAO’s Member Countries at the Organization’s 20th General Conference in November 1979. The Hungarian Delegation, led by the former Hungarian Minister of Agriculture and Food Dr. Pál Romány, played an active role at the 20th Session of the FAO Conference and suggested the idea of celebrating the WFD worldwide. It has since been observed every year in more than 150 countries, raising awareness of the issues behind poverty and hunger.

THEMES
Since 1981, World Food Day has adopted a different theme each year in order to highlight areas needed for action and provide a common focus. The 2018 theme for the WFD is “Our actions are our future. A zero hunger world by 2030 is possible”.

2011: Food prices – from crisis to stability

2014: Family Farming: “Feeding the world, caring for the earth”

2015: “Social Protection and Agriculture: Breaking the Cycle of Rural Poverty”

2016: Climate change: “Climate is changing. Food and agriculture must too”

2017: Change the future of migration: Invest in food security and rural development 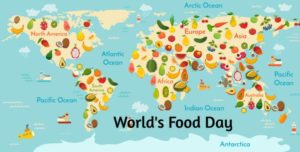 EVENTS
In over 150 countries, events mark World Food Day. Examples of events across the world held in recent years are listed:

Europe
In Italy, ministries, universities, research agencies, international agencies, and NGOs have organized many conferences as well as exhibitions and symposia. The Italian Ministry of Agriculture and Forestry Policies organized a meeting which focused on women’s rights in rural areas in 2005.
In Germany, the Federal Ministry of Consumer Protection, Food and Agriculture have all become involved via press conferences. Spanish television has been active in broadcasting events. FAO Goodwill Ambassador – Spanish soccer star Raul – has taken part in events and helped highlight food-security issues across his country.
The UK Food Group has also been active through conferences and media broadcasts. In the emerging economies of Eastern Europe – i.e., Albania, Armenia, Croatia, Czech Republic, Georgia, Hungary, Macedonia, Moldova, Serbia and Montenegro, and Slovak Republic – a variety of activities have been held.

Africa
Angola celebrated WFD in 2005 through the 4th Forum on Rural Women, while in Burundi the second Vice-President planted potatoes to provide a symbolic example about food production. In Central African Republic, the President of the Republic has inaugurated a bridge at Boda to coincide with World Food Day, making the agricultural production area more accessible.
In Chad, thousands of people have attended debates, conferences and activities including theatre, films, folk dance, visits to project sites and visits by agricultural companies.
In Ghana, the Ministry of Food and Agriculture has hosted a food security conference, while Namibia has run an awareness campaign through national media.
In Botswana, the National Food technology research center recently exhibited its products and services at the World Food Day commemoration held at Kalakamati Farm on 19 October 2017. 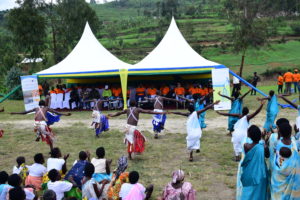 Nigeria
A country which still suffers nutritious food depravity despite the huge existing opportunities to become a food secured nation. The United Nations Children’s Fund (UNICEF) in July 2016, claimed over 2.5 million Nigerian children were suffering from severe acute malnutrition.
Similarly the Food and Agricultural Organization (FAO) of the UN had reported that some 7.1 million people are now severely food insecure across four countries including Cameroon , Chad , Niger and Nigeria.These levels of food insecurity arise from the high cost of food commodities across the nation , lack of infrastructures , high cost of production , poor / lack of storage facilities , lack of markets , limited / non -existent extension officers across the states , poor security of lives occasioned by insurgency in the North East , and the constant clashes and invasions between farmers / herds men , poor / insufficient fertilizer (this is despite the Presidential Fertilizer Initiative ) introduced by the present administration to supply fertilizer at ₦5,500 to farmers .
Other issues include the continual importation of agric commodities which denies local farmers access to markets, natural disasters including flooding and the unmitigated effects of climate change, aging population of farmers and use of crude methods of production among other issues.